Sivakasi is a special-grade municipal town located in the Virudhunagar district (formerly known as Karmavirer Kamarajar district) of Tamil Nadu. Sivakasi is one among the two revenue divisions of the Virudhunagar district and an active and significant contributor to the state's economic system. Located 534 km away from the southern metropolis of Chennai, Sivakasi is a leading hub for fireworks, safety matches and offset printing solutions. As a matter of fact, Sivakasi takes credit for the production of over 70% of the country's safety matches and fire crackers. What is more, Sivakasi as a town is known for its antiquity and considered as one of the important pilgrimage centres for the Hindus in the country. 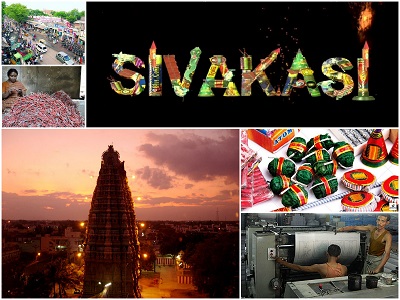 Sivakasi: Past and Present

Sivakasi was founded during the early 15th century AD. Between 1428 and 1460, the southern part of the historic city of Madurai (comprising of modern day Sivakasi and its surroundings) region was under the administration of the Harikesari Parakkirama Pandian of Pandyan dynasty (an ancient and illustrious Tamil dynasty). The town of Sivakasi was an integral part of Madurai and has been dominated by various kingdoms at various times who include Karnata Empire (Vijayanagar Empire), subsequent Pandyas, Madurai Nayak dynasty, Chanda Sahib - the Mughal Empire's Sepoy, chief official, army commander and Nawab of the Carnatic between the time period of 1749 and 1752, Nawabs of Arcot and finally under the British Raj. The period of British in administrating the town of Sivakasi holds historical significance that the region witnessed the brutal Sivakasi riots which are a series of communal disruptions that happened during the year 1899.

The commercial town of Sivakasi is located at 9.45°N 77.8167°E and has a mean natural elevation of 101 m above the sea level. The town is situated in Virudhunagar district of the South Indian state of Tamil Nadu. Sivakasi is situated in the eastern side of the Western Ghats and to the west of Sattur (a town in Virudhunagar district). Concerning to the topography, Sivakasi is mostly plain, without any major geological features as there are no noted mineral resources available in the region. The town feature red and black soil types that are suitable for the crops which include millets, chillies and cotton.

Distance Chart from Sivakasi to nearby localities and other important cities:

The industrial centre of Sivakasi is typically hot and dry throughout the year. Generally, the temperature reaches a maximum of 39°C and a minimum of 23°C. The months of April to June are considered as the hottest months of the year and December to January are luckily the coldest months of the year. Sivakasi struggle from lack of significant precipitation as the mean rainfall of Sivakasi is recorded as 812 mm yearly, which is much lesser than the state's average rainfall of 1,008 mm.

The southwestern summer monsoons occur from the month of June and last up to August every year. It is important to note that the North East monsoon also known as the retreating monsoon which occurs during the months of October, November and December brings heavy rainfall to the region. The mean humidness of the Sivakasi town is 76.2% and alters from 65.6% to 79.2%.

Sivakasi is a developing town in terms of health care as the town is equipped with only one government hospital and a few municipal health centres. The last decade of Sivakasi has witnessed a lot of reputed health care facilities commencing their extensive operations that literally stopped the local population from preferring the nearby cities for advanced treatments and multispeciality health care facilities. At present, the town of Sivakasi is equipped with one government hospital, twenty five private hospitals, clinics and nursing homes, one municipal maternity home and three municipal health centres.

Town bus service is the primary and one of the most preferred transportation services in the town of Sivakasi. Town bus services along with a lot of private minibus operators offer good connectivity within the town and the surrounding villages which include Muthalipatti, Vilampatti,  Alangulam, Thayilpatti, M.Pudupatti, Alangulam, Alamarathupatti, Puliparaipatti and so on. The Tamil Nadu State Transport Corporation (TNSTC) operates daily bus services from the main bus stand of Sivakasi to various cities of the state which include Chennai, Erode, Karaikudi, Nagercoil, Ramnad, Tanjore, Madurai, Tenkasi, Tiruchendur, Trichy, Tiruppur, Tuticorin, Dindigul and so on.

Sivakasi railway station (SVKS), situated in the rail head from Madurai to Tenkasi and Sengottai (Tirunelveli district). It links the southern state of Tamil Nadu with Kerala through Rajapalayam (Virudhunagar district) and Sengottai. The Pothigai SF Express train links Sivakasi to Sengottai/SCT and Chennai Egmore/MS in either ways. Apart from the bus services and train services, auto rickshaws are also available from all prime points of the town.